This is a reference site for Help Guides for the Faculty of Applied Science and Engineering at the University of Toronto. It is written and edited by the Education Technology Office.

If you’d like to see projects that we’ve worked on, and other things we are up to, visit the Education Technology Office’s website .

What is a storyboard?

Think of a storyboard as a series of sequential images that represent what you intend to display within your video.

Typically, storyboards are made after a script is complete.

Why make a storyboard?

Storyboarding allows you the opportunity to visualize the content within your script before going out and attempting to record and/or compile footage. You can take the time beforehand and decide how to best visually represent the content in your script.

Assume you're trying to showcase the features of a particular object. Instead of figuring out how you will film this on the spot, you can storyboard it by breaking down the script into sections and assigning relevant visuals accordingly. Below, you can see that we've broken the script down into 2 different shots. Together, both of these shots help to highlight what is written in the script. The speaker is introduced in Shot 1 - here we show the audience the front of the speaker.  On the other hand, Shot 2 focuses on the back of the speaker and the variety of modes that users can toggle between. 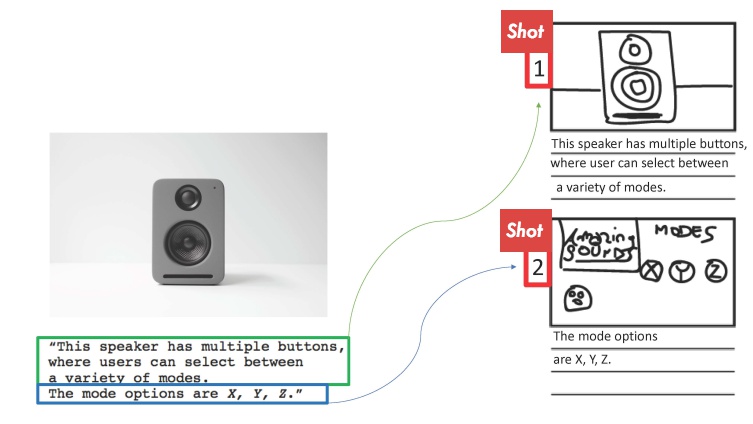 Storyboarding will also help you plan with regards to the locations that you will be shooting in. You may be using a single location for a variety of scenarios. Consider the slide below. You can see that there are 4 different setups in the same location. Although these scenes do not occur sequentially in your video (the black empty boxes represent other scenes in different locations), in order to save time and energy, you would ideally film them all in one visit to the location.

After reviewing your completed storyboard, track the locations of your scenes and plan your shooting accordingly.

How to use a storyboard?

Download the template and begin storyboarding your next project!